A couple of weeks ago we released and started spreading the new batch, but once again, due to recording trips and various life-dragging delays still had to write about it.

4 new tapes are out and as usual you can order them writing at
angstrec@gmail.com 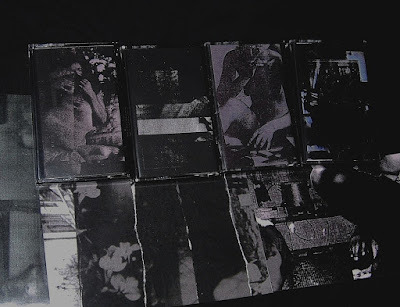 Wish For Skin is Erik Brown from Massachusetts, that also works as Scald Hymn and Streiber and in Under Nylon [track down also his previous efforts on Unseen Force, Bacteria Field, Summer Isle, and his own Love is the law tape label]. We're happy that this work puts an end to a moment of hiatus of the project, and that Erik crafted for us two awesome long rugged tracks of stripped down, painfully emotive PE. Uneasy haunting moods, chocking screams of despair drenched in muffled / crispy noises.
50 copies on chrome cassettes. Artwork has two different xerox blends, on same hi quality paper (25 of each were made).

EXCERPTS FROM ALL TAPES HERE